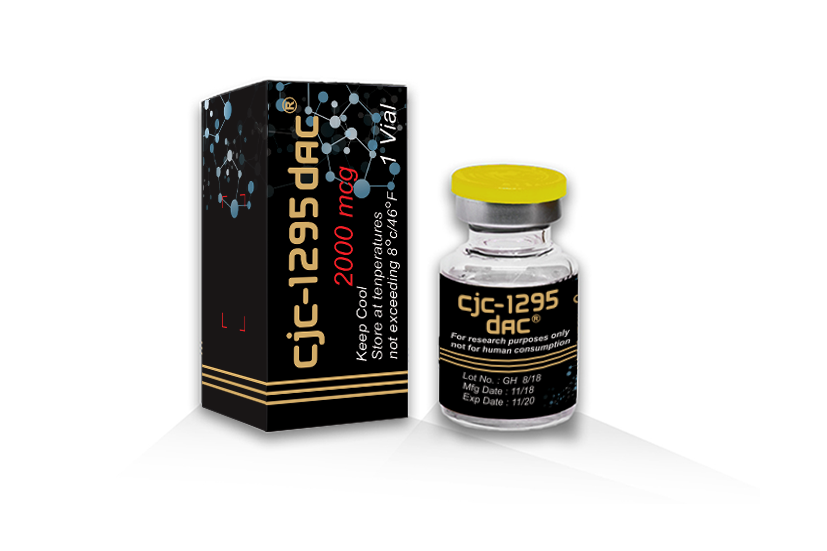 CJC-1295 (DAC) CJC-1295 with DAC complex was developed by Canadian scientists with purpose to increase effective half-life period of growth hormone release hormone or GHRH. The compound contains 30 amino acids(the 44 amino acids of GHRH long version with 15 removed)  and is in the class of tetrasubtituted peptide hormones. CJC-1295 with DAC shows potential to increase growth hormone and IGF-1 secretion with no increase in prolactin. It was invented by ConjuChem, a Canadian biotechnology company.
CJC-1295 with DAC complex has a greater ability to bind towards GHRH receptors. It is a modified form of GRF 1-29. This prevents the hormone from degradation and leads to effective fat loss. The advantage of this compound is its ability to promote the synthesis of protein. It builds protecting groups around the amino acids of GHRH usually susceptible to degradation. CJC-1295 is a tetrasubstituted peptide hormone containing 30 amino acids with molecular mass of 3647.28 and formula C165H269N47O46. Early studies on this compound were done in the 2000’s and were generally very successful as the peptide was being studied to get rid of visceral fat cells and deposits through higher exogenous HgH levels. CJC-1295 is a long acting synthetic version of Growth Hormone Releasing Hormone (GHRH). 30mcg/kg to 60mcg/kg doses can increase gh levels up to 10X normal for 6 days or more with plasma IGF-1 concentrations by 3X for 9-11 days Researchers are looking at CJC 1295 with DAC as a compound with a relatively long half-life, tests are showing somewhere between 5.8-8.1 days with IGF-1 levels staying elevated over 30 days

Results show that 30mcg/kg CJC-1295 is equal to 5iu's of gh without the normal negative side effects from taking gh. In essence its much better to use CJC-1295 to make your body produce its own gh instead of taking a synthetic gh that also shuts down your normal production. So how does CJC-1295 and Myostatin relate. Growth hormone directly regulates myostatin. As growth hormone rises, myostatin lowers, which unleashes your potential for muscle growth. As myostatin lowers glucocorticoids effect on fat storage and muscle breakdown lowers. CJC-1295 dramatically raises gh levels which will dramatically lower myostatin which in turn will lower the effects of glucocorticoids fat storage and muscle breakdown. Now you know what has changed that has turned the Pro's into Freaks. New research is looking into CJC 1295’s ability to aid in slow wave or deep sleep. One of the advantages of CJC-1295 over traditional GHRH or rHGH is its ability to bioconjugate with serum albumin, thus increasing its half-life and therapeutic window. It accomplishes this by using protecting groups around the amino acids of GHRH typically susceptible to enzymatic degradation..

CJC 1295 is actually a modified form of GRF 1-29 belonging to the class of tetrasubtitued hormones that contain 30 amino acids. It can be considered an analog of GH releasing hormones, and the molecular mass is 3647.28.  The formula is C165H269N47O46.

The CJC 1295 complex was the result of the work of Canadian scientists working to increase the half-life of the hormones that release the growth hormone.  The first studies in a clinical setting regarding this compound were conducted in 2000.  Another study involving the effectiveness and efficiency of the drug, as well as the safety, was done in 2006.  It was double-blind, placebo-controlled, and randomized.

The involvement of DAC allows a greater ability to bind toward GHRH receptors.  This protects the hormone from degrading.