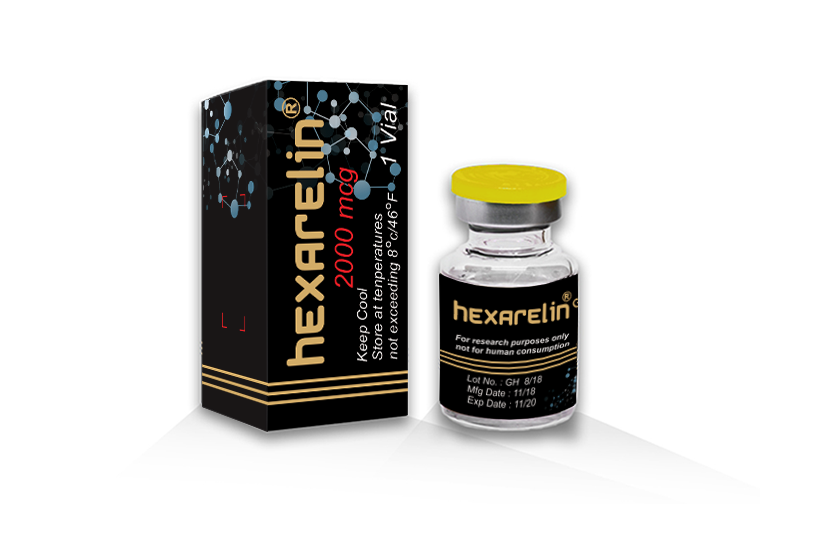 Hexarelin is peptide containing 6 amino acid very similar to GHRP-6. The compound works by acting on the hypothalamus and pituitary gland to stimulate gH secretion.
Hexarelin has a molecular weight of 887.04 and molecular formula C47H58N12O6. Along with the stimulation of glands to release more gH production it may also play a role in the protection and healing process for cardiac problems and possess some neuroprotective functions. Continued research is focusing on Hexarelin’s affect on the brain and on its potential at protecting CNS after injuries. Hexarelin is still being studied and its total influence still under testing, this peptide is manufactured for research only.

Hexarelin is a non-natural (synthetic) growth hormone (GH)-releasing hexapeptide which belongs to the GHS family. This particular protein has been found to act on both pituitary gland and the hypothalamus, however, its mechanisms of action in the human physiologic system has not yet been fully elucidated (Arvat et al. 1995). This synthetic peptide has similar GH-secreting properties with its predecessors such as the GHRP-6, GHRP-2 and GHRP-1. Hexarelin is GHRP analog in which the Trp was substituted with chemically more table 2-Methyl-Trp (Denghenghi et al. 1994). The chemical structure of which is shown in the following: Many studies on mice have been carried out geared towards deeper understanding of its chemical activity. Many studies reported that some of its effects are increase in muscle strength and endurance, gain muscle mass, neural protection, rehabilitation of the joints and increased rate of wound healing. However, unlike GHRP-6, hexarelin does not induce food intake because of its incapability to drastically increase the grehlin levels that are responsible for the feeling of hunger and faster emptying of the gastric system. But the studies of Deghenghi et al. (1994) reported that hexarelin possessed similar effectiveness in stimulating the GH release in a long-lasting event and slightly more effective than the GHRP-6. These are supported by a number of studies. Locatelli et al. (1999) reported that hexarelin provides protection and healing especially for the cardiac dysfunction and abnormalities. They have observed that 7 days after the administration of the hexarelin to the rat, it prevented the exacerbation of the ischemia-reperfusion damage that has been induced by hypophysectomy. Furthermore, hexarelin also prevented the increase in diastolic pressure of the left ventricular end, so as with coronary perfusion pressure, reactivity of the coronary vasculature to angiotensin and release of the creatine kinase from the perfusate of the heart. Also, it was suggested that hexarelin prevented the fall in prostacyclin release and enhances recovery of contractility. It has also been noted that its mechanisms of action are not mediated by the growth hormone, but most probably because of the activation of specific receptors in the heart (Locatelli et al. 1999). The same results had been obtained by the investigations of Ghigo et al. (1994) whioch have shown that hexarelin administered through the intravenous route had limited variability, but had been suggested to be dose-dependent. It can then be used and administered to humans for clinical applications. Hexarelin (HEXA) is a peptide GH secretagogue with a potent ability to stimulate GH secretion and recently reported cardioprotective actions.