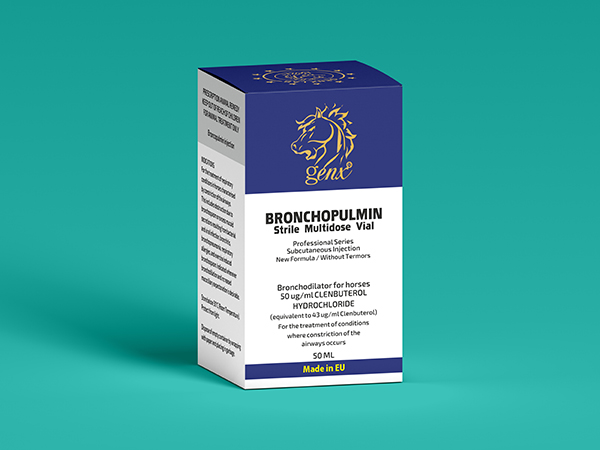 Bronchopulmin is not an anabolic steroid, but rather a stimulant that belongs to a classification of compounds known as sympathomimetics. Clenbuterol’s original use as a medicine in the prescription drug market was (and still currently is) as a bronchopulmin in the treatment of asthma. Upon activation of beta-2 receptors in the cell lining of the bronchial tubes, it initiates bronchial dilation (the opening and expanding of the airways) in the lungs, nose, and throat.
In bodybuilding clenbuterol is most commonly utilized in cutting, pre-contest, and fat loss cycles. Clenbuterol can bind to receptors on fat cells and initiate lipolysis. This effect involves its interaction with beta-2 adreno-receptors in fat tissue.
One important point to note is that through continued consistent use, clenbuterol will downregulate beta-2 receptors in the body in response to its stimulation of those receptors, and it occurs very quickly. The manifestation of this effect is diminished fat loss during use until the fat loss reaches a complete stop. There are two methods of remedying this effect. The first is to introduce time off from use of the drug for at least 2 weeks. The second is through the use of Ketotifen, an anti-histamine drug that is known for upregulating beta-2 receptors.

Clenbuterol is not an anabolic steroid, it does not express or exhibit any of the known side effects that are associated with anabolic steroid use. Instead, clenbuterol expresses side effects that are common to all drugs and compounds in the stimulant class.  Perhaps the most unique of clenbuterol side effects is the commonly reported side effect of muscle cramping. The cause of this is through Clenbuterol’s depletion of taurine in the body. Taurine, alongside magnesium, potassium, and sodium, play very crucial roles in the regulation of bioelectrical nerve impulses and signals that govern the contraction and relaxation of all muscle tissue types. When taurine is depleted, involuntary and often intense and painful muscle contractions that lead to cramps can result. Supplementation with taurine at 2.5 – 5 grams per day can mitigate this side effect.
Clenbuterol may adversely affect the cardiovascular system and raises heart rate and blood pressure. Please take this into account prior to using it.
Other common clenbuterol side effects include tremors, insomnia, sweating, and nausea.
In order to achieve any significant amount of fat loss, the maximum сlenbuterol dosage should be no more than 120 – 160 mcg per day (for males).

WARNING: The dosage must be slowly ramped up to the maximum dosages mentioned. The initial starting dosage should not exceed 20-40 mcg for the first 2-4 days, after this the clenbuterol dosage is increased by another 20 mcg and so on. Titration downwards is not necessary when ending clenbuterol use.

Clenbuterol exhibits a half-life of approximately 37 hours, so all Clenbuterol dosages should ideally be consumed at once in the morning. There is no requirement to spread the clenbuterol dosages throughout the day, and this would in fact cause worse insomnia and sleep disturbances.
This product make by new formula( without tremors)

Anabolic activity index not a steroid

Androgenic activity index not a steroid

The change in muscle tension as a result of a 5-minute fatigue protocol, showing the differences in maximal force and 50% initial force (black dotted lines), as well as the resistance to fatigue (Tlim) between rat extensor digitorum longus (EDL) muscle treated with clenbuterol and that of controls. From Sirvent et al., Effects of chronic administration of clenbuterol on contractile properties and calcium homeostasis in rat extensor digitorum longus muscle. PloS one. 2014;9(6):e100281.

Clenbuterol is an adrenergic beta-2 receptor agonist associated with increases in skeletal muscle growth1.
It is associated with the increase of fast-twitch glycolytic muscle fibers as opposed to slow-twitch oxidative fibers2.
This results in rapid changes (or 'remodeling') in the structure of skeletal muscle. Recent animal studies have shown that chronic subcutaneous clenbuterol administration may not increase relevant characteristics of muscular activity such as specific maximal tetanic force and contractile efficiency3.
Another study demonstrated that chronic administration did not change relative force in the muscles of male Wistar rats2. However, it was associated with an increase in absolute force2.

Clenbuterol increases calpain (a serine protease) activity2.
Chronic clenbuterol intake was also found to be associated with an imbalance in calcium (Ca2+) signaling and concentration in muscle fibers2.
A study using rat soleus muscle fibers showed inhibitory effects on intracellular Ca2+ and action potential4.
The latter was not reversed in the presence of a beta-2 antagonist, indicating clenbuterol may also have activity at alternative receptors4.
Therefore, clenbuterol may change the kinetics of muscle contraction via indirect pathways based on the disruption of cellular Ca2+ homeostasis3.

Clenbuterol may be associated with the increased risk of muscle fatigue2.
The switch to fast-twitch fiber activity results in varying levels of hypertrophy (rapid growth) in different muscle types5.
This may be due to the responses of different subtypes of calpain to this drug5.
Some researchers argue that clenbuterol administration results in myotoxicity at high doses (approximately 1mg/kg per day)6.
Clenbuterol is also associated with damage to cardiac muscle4.
Other Functions and Applications of Clenbuterol
Adrenergic beta-receptors are also present in the central nervous system. Their specific roles in the brain may be elicited through the experimental application of clenbuterol. Intraperitoneal clenbuterol (at three different doses) reduced visuospatial learning discrepancies in a rat model of impaired cortical function (elicited by significantly reduced beta-receptor expression in the neocortex)7.
The injection of clenbuterol into a brain region (the ventral bed nucleus of the stria terminalis) implicated in the stress-related use of cocaine reinstated this behavior in rats8.
This indicates that beta-receptors may regulate the activation of the ventral tegmental area (another brain region) associated with cocaine-seeking8.
The infusion of clenbuterol into the basolateral complex of the amygdala enhanced 'emotional' and 'aversive' memory in rats9.
Some studies have indicated that beta-2 receptors are associated with the breakdown of glycogen in astrocytes, which supplies energy to neurons in the absence of dietary glucose10.
A study using a mouse model of this found that clenbuterol administration did not influence this, but that beta-2 activation was associated with the protection of axons10.
Clenbuterol may also have a therapeutic role in developmental disorders. The administration of clenbuterol resulted in the reduction of respiratory and motor co-ordination deficits in a mouse model of Rett syndrome (knockout of the Mecp2 gene)11.
It was also associated with improvements in the survival and social recognition abilities of young male mice with this mutation11.
Clenbuterol also improved cognition and anxiety in older female heterozygous mice11.

5. Douillard A, Galbes O, Rossano B, et al. Time course in calpain activity and autolysis in slow and fast skeletal muscle during clenbuterol treatment. Canadian journal of physiology and pharmacology. 2011;89(2):117-125.

DESCRIPTION:
Clenbuterol is a direct-acting sympathomimetic with mainly beta-adrenergic activity and a selective action on beta2 receptor (a beta2 agonist). Each mililitr contains 50 microgram of Clenbuterol Hydrochloride. It is designated chemically as 1-(4-Amino-3,5-dichlorophenyl)-2-tert-butylaminoethanol hydrochloride.It occurs as white or almost white crystalline powder. Soluble in water and in alcohol; slightly soluble in acetone. 5% solution in water has a pH of 5.0 to 7.0.

Clenbuterol acts through selective stimulation of the β2-receptors. It differs from other β2-specific sympathomimetic by the low effective dose, long biological half-life, rapid and complete absorption by subcutaneous administration. It has properties similar to those of salbutamol. It is used as a bronchodilator in the management of reversible airways obstruction, as in asthma and certain patients with chronic obstructive pulmonary disease.